For the Electro-intensive industries, the electricity supply is a major competitiveness issue…

Enhance the electricity price visibility for the electro-intensive industry

For the Electro-intensive industries (aluminum, chemistry, industrial gas, paper, steel…), electricity supply and its cost is a major competitivity issue as it represents between 15% and 50% of production costs. Industrial investments are long term in nature (10 years horizon at least) and therefore uncertainties regarding electricity price evolution threaten the sustainability of these industries.

Since the liberalization of the electricity market in 2000 in France, market prices have increased and became unpredictable. In July 2005, the French government organized a roundtable with electricity producers and electro-intensive consumers to address the growing uncertainties over long term electricity prices.

Following this roundtable, electro-intensive companies gathered to found a consortium called Exeltium, whose purpose was to negotiate an optimal electricity supply contract on behalf of its shareholders and to finance it.

The purpose of EXELTIUM is to provide French electro-intensive industrial sites with a stable and competitive electricity price over the long run.

It took almost 5 years from the 2005 roundtable for Exeltium to negotiate with EDF, to get the European Commission approval on its contractual scheme and to finance it. In 2010, Exeltium started to supply its 27 shareholders based on the contract negotiated with EDF.

This unique partnership running until 2034, will provide Exeltium’s industrial shareholders the required visibility to promote investment, secure jobs and keep their know-how in France.

Partnership with EDF: a collaboration impacted by the financial crisis

Following a European request for proposal in 2006 EDF and Exeltium signed on April 5th, 2007 a memorandum of understanding on a take-or-pay contract for a 311 TWh electricity supply over 24 years against:

After lengthy discussions with the European Commission in order to get an agreement on the mechanism, EDF and Exeltium signed a contract on July 31st, 2008.

Nevertheless, the financial crisis in autumn 2008 and the credit crunch made the financing of the up-front payment difficult. Therefore, the project was split into two phases:

On May 1st, 2010 the deliveries of the first phase started, supplying about a hundred sites from 27 industrial groups. The share of electric energy provided by Exeltium to these industrial sites represents around a third of their consumptions.

The second phase was not launched as planned in 2011. It is still in reflection since many parameters have changed and have slowed down the process. No decision about future construction of EPR plants has been taken, the NOME law and the ARENH mechanism had been set up, the electricity demand is weak and both coal prices and carbon emission allowance prices are low. All these factors have perturbed the short-term equilibrium of the mechanism.

2005: The Minister of Economic organises a Roundtable dedicated to the French electro-intensive industries.
2005, December: A legal status is granted for electro intensive industries in the financial law for 2006.
2006, May 3rd: Publication of the Decree n°2006-506
2006, May 13th: Exeltium is founded by 7 electro-intensive companies
2006, May 22nd: Exeltium invites tenders from 16 European electricity producers.
2006, July: 4 interested producers replied to the invitation to bid.
2007, April 5th: Exeltium and EDF signed a 24 years industrial partnership.
2007, July 1st: Financial term sheets were signed
2007-2008 European Commission discussion to obtain their approval
2008, July 31st: Exeltium and EDF signed a new industrial partnership in compliance with EU rules
2008-2009: Seeking new financing sources in a global economic crisis context.
2010, March 25th: The initial contract signed between Exeltium and EDF was split into 2 phase:
– Phase 1 covering 148 TWh
– Phase 2 covering 163 TWh.
2010, April 12th: Financing documentation related to phase 1 was signed by Exeltium.
2010, May 1st: Phase 1 started:
– Exeltium paid an upfront payment of €1,75 billion to EDF
– and started to supply electricity to its shareholders’ industrial sites.
2011, July: The regulated access to nuclear electricity (ARENH) took effect.
2011-2012: Reopening of the negotiations with EDF concerning the Phase 2 implementation.
2012, July: Negotiations were suspended as no agreement between the parties was found.
2013… After having operated for 3 years and half, Exeltium supplied 25TWh to its shareholders.

Exeltium, a project finance dedicated to the electro-intensive industry in France

The contract signed by EDF and Exeltium was financed by the latter through a project finance scheme. The advantage of this scheme comes from the leverage effect and the deconsolidating of the debt, which enables valuation of the contract from different viewpoints: a consumer and a producer one.

Nearly 90% of the initial cost of the contract was borrowed by Exeltium through a project finance scheme. From the consumer viewpoint, it benefits from the greater financial leverage achieved by Exeltium. Additionally, project finance being non recourse debt, the shareholder does not register Exeltium debt on its own balance sheet. Nevertheless, the shareholder has to account for the cost of equity it brought to the financing (around 10%) to determine the final economic cost of electricity it gets.

From the producer viewpoint, it collected near half of the value of the contract in advance (€ 1,75 Bn).  By reducing its debt and saving its own equity for other investments, the producer can value the upfront payment it received at its own cost of capital. 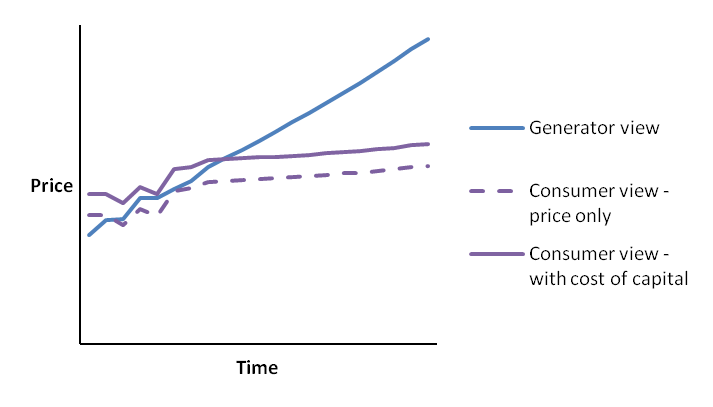 Electricity price provided by Exeltium to its clients is made up of 2 main parts: