Jean-Paul Aghetti has been appointed as the new President of Exeltium as of the 1st of October of 2020. He has replaced Jean-Pierre Roncato.

Jean-Pierre Roncato: “I leave Exeltium at the end of September after eight exciting years. Exeltium’s structure has shown its relevance and resilience in defending the long-term competitiveness of the electro-intensive industry.”

Prior to coming to Exeltium, Jean-Paul Aghetti has worked during 31 years at the energy department of Pechiney/Alcan/Rio Tinto and then Aluminum Dunkerque. He will thus be able to bring to Exeltium his solid experience in the electro-intensive industry sector. He has also been commissioner at the Energy Regulatory Commission between February 2007 and January 2011. Jean-Paul Aghetti wishes to make Exeltium grow further by benefitting from the changing energy framework.

Jean-Paul Aghetti: “Exeltium has shown its capacity to manage a complex contract with 27 shareholders-clients and almost 100 industrial plants. Thanks to this experience, it is a natural actor for contracting long term PPAs. We will explore new structures like renewable PPAs in France and/or abroad.”

Jean-Pierre Roncato has been Exeltium’s president from 2012 to 2020. During his mandate, he was instrumental in significantly improving Exeltium’s price competitiveness and robustness, thanks to the EUR 1.435 billion senior debt refinancing in 2015. Before Jean-Pierre Roncato’s presidency, Laurent Chabannes designed the contract in compliance with competition law and managed to raise the initial financing.

Exeltium’s new debt has been implemented

Exeltium is pleased to announce that its senior debt has been refinanced.
The drawdown of the new debt and the repayment of the former one will took place today.

Paris, 10 apr 2015 (AFP) -Exeltium, the french consortium for huge energy consumers, announced on friday that it has signed an agreement in order to refinance its senior debt for 1.435 billion euros.

By carrying out this refinancing, which will be put in place “in the two following months”, Exeltium can lenghten its debt matury.

By adding this refinancing to the agreement with EDF, anounced last July, to lower the power supply price in their bilateral contract which started in 2010, the consortium now says they are “henceforth capable of supplying power to its clients at a more competitive and predictible price.”.

EXELTIUM and EDF have signed a MOU in order to of adapt the power supply contract so that the electro-intensive companies involved can gain competitiveness. 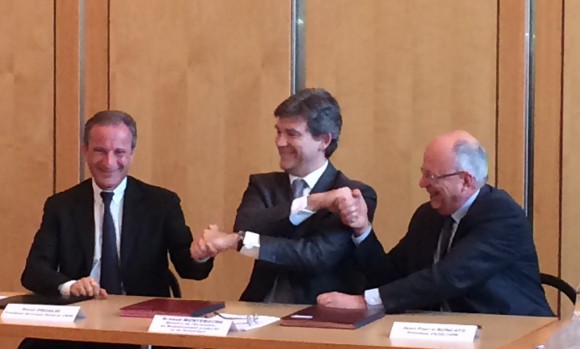 Exeltium is a strong act of industrial developement : global industrial groups have indeed invested about 1.75 billion euros in France in ordeer to secure more than 20 years of electricity spupply for a hundred industrial plants, affecting 60 000 jobs! Exeltium is also an adequate answer to the weakening of electro-intensive industries in France, by creating visibility on electricity prices in an unfavorable energy context.

Unfortunately, Exeltium’s competitiveness has now become an issue: while Exeltium’s members contribute to the development of reactors like EPR, much more costly than the French existing nuclear park, other countries develop, on the contrary, policies in favour of electro-intensive companies’ competitiveness.

Gaining back Exeltium’s intended level of competitiveness is an industrial emergency, in particular for some plants, which would be directly threatened in the short term, if they are left without visibility on their electricity supply, deeply strategic for them.

To do so, we must act quickly: issues can be remedied fastly, as solutions to them have been identified in the course of a constructive and transparent dialogue with the public authorities.
Should they gain their visibility and competitiveness back, Exeltium’s members will be able to keep on contributing to the sustaining of the French nuclear park, in order to secure the future of their industrial sites in France.